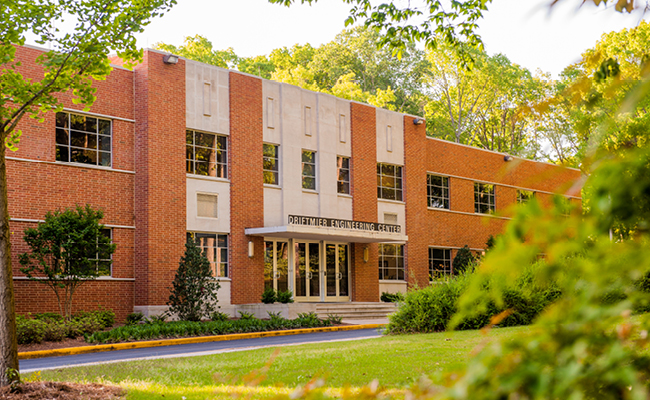 The University of Georgia has selected eight faculty members in the College of Engineering for promotion in academic rank, including four who have earned tenure.

“On behalf of our faculty, staff and administration, I sincerely congratulate these dedicated educators, scholars, and researchers,” said Donald Leo, dean of the UGA College of Engineering. “Their work addresses some of the greatest challenges facing our world and they are preparing a new generation of engineers and leaders through their commitment to our students.”

Ramaraja Ramasamy and Joachim Walther have been promoted to the position of professor.

Ramasamy studies fundamental electrochemical problems through nanoscale science and technology. His primary focus is electrochemical energy conversion but he also investigates biosensors and bio-nanomaterials. Ramasamy's research has attracted funding from the U.S. Department of Agriculture and other partners. In addition to his instructional and research responsibilities, Ramasamy serves as the college’s associate dean for academic affairs and assessment.

Walther is the founding director of the Engineering Education Transformations Institute. His interdisciplinary research spans interpretive methodologies, the role of empathy in engineering formation, and student development in interdisciplinary and interprofessional spaces. Walther is a recipient of the Presidential Early Career Award for Scientists and Engineers, or PECASE, the highest honor bestowed by the U.S. government on science and engineering professors in the early stages of their research careers.

Davis conducts research that helps predict, and ultimately avoid, failures in aerospace and naval structures. His work has attracted funding from agencies including NASA, the Department of Defense and the Department of Energy. Davis also work closely with industry partners such as Gulfstream Aerospace on student design projects.

Freeman uses the basic concepts of fluid mechanics to create artificial cells similar in scale to organic cells, one of only a handful of scientists in the U.S. conducting such research. His work, funded by the National Science Foundation and other partners, looks for ways to improve our understanding of natural processes and ways to improve smart materials.

Hallow holds a joint appointment in the College of Engineering and the College of Public Health's department of epidemiology and biostatistics. She creates computer models that predict how diseases such as diabetes will respond to drug therapies. Her research is funded by industry partners including Novartis Pharmaceuticals and Astrazeneca.

Handa focuses on developing new biocompatible coating materials for medical implant applications to help reduce infections in hospital settings. Handa and his research group have generated 12 patent disclosures in a three-year period, and in 2018 he founded his own startup, inNOveta Biomedical LLC. Handa’s research has attracted funding from the National Institutes of Health, the Department of Defense, and other partners.

Daniel Geller has been promoted to senior public service associate. Geller’s areas of specialty include biofuels, solar power, and bioproducts.

Crystal Leach has been promoted to associate professor of practice. She also serves as UGA’s Director of Industry Collaborations, a position which see her work with faculty and administration to build industry partnerships that align with UGA’s research capabilities and strategic priorities.

“It is especially gratifying to see these faculty members earn promotions because they work across disciplines and engage with industry and communities to find solutions to critical challenges,” said Leo. “They truly embody the University of Georgia’s land-grant and sea-grant missions.”