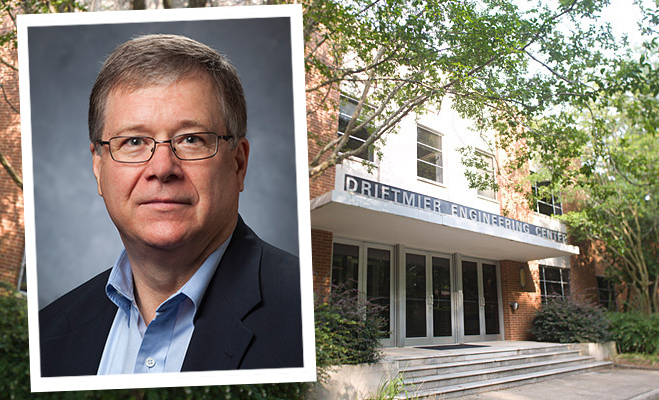 Five University of Georgia faculty members - including the College of Engineering's Tim Foutz - have been named Josiah Meigs Distinguished Teaching Professors, the university’s highest recognition for excellence in instruction at the undergraduate and graduate levels.

The Meigs Professorship underscores the university’s commitment to excellence in teaching, the value placed on the learning experiences of students and the centrality of instruction to the university’s mission. The award, sponsored by the Office of the Senior Vice President for Academic Affairs and Provost, includes a permanent salary increase of $6,000 and a one-year discretionary fund of $1,000.

“Our Meigs Professors are exemplars of the University of Georgia’s commitment to providing students with unparalleled learning experiences,” said Pamela Whitten, senior vice president for academic affairs and provost. "They have made enduring impacts on their students as well as on the institution as a whole."

The 2016 Meigs Professors are:

·      Tim Foutz, a professor in the College of Engineering;

·      Stephanie Jones, a professor of educational theory and practice in the College of Education;

·      Karen Whitehill King, a professor of advertising and the Jim Kennedy Professor of New Media in the Grady College of Journalism and Mass Communication;

·      Rodney Mauricio, a professor of genetics in the Franklin College of Arts and Sciences; and

·      Tim Smalley, an associate professor of horticulture in the College of Agricultural and Environmental Sciences.

Foutz, who joined UGA in 1988, treats his classroom as a think tank to lead students toward viewing engineering as a mindset. He has played a dynamic role in the expansion of UGA’s engineering offerings. He transformed the engineering curriculum by developing a series of courses on design theory and an integrated curriculum for biological engineering. His research on how to incorporate the humanities into engineering education has become a national model, and he has worked with K-12 teachers on blending engineering topics in mathematics, science and the social studies, helping increase student interest in STEM.

Foutz was the inaugural director of the First-Year Odyssey Seminar Program and previously served as director of academic programs for the College of Engineering. He is a recipient of the 2015 American Society for Engineering Education-Southeastern Section Outstanding Teaching Award.

Jones uses interdisciplinary approaches to help students better understand social class, gender and race within educational contexts where both inequality and equality can be produced. She has collaborated in the development or redesign of multiple courses and programs since she joined the faculty in 2007 and has partnered with university and community-based colleagues for projects involving writing, art, geography, food literacy and other topics. She has been widely published on the topic of teaching and learning, including three books that have become staples on syllabi across the nation.

Jones has received many accolades, including the 2015 First-Year Odyssey Seminar Teaching Excellence Award and the College of Education’s 2011 Ira E. Aaron Award for Teaching Excellence and Collegiality. She has participated in the Lilly Teaching Fellowship and is currently a UGA Teaching Academy Fellow.

King has worked to create innovative experiential learning opportunities for students, including the development of the Grady PHD Worldwide Scholars Program; the Performics AdWords Certification program; the Moxie Social Media Strategy Bootcamp; and the Grady/Turner Broadcasting partnership. She also led the development of the advertising and public relations 4 + 1 master’s program and has been involved in the development of international and online programs for the college and portions of the LG/Grady PR certificate and social media certificate programs.

King received the Charles H. Sandage Excellence in Teaching Award from the American Academy of Advertising in 2015 and the Donald G. Hileman Award as Educator of the Year for the Seventh District of the American Advertising Federation. She is a former Lilly Teaching Fellow and an inductee into the UGA Teaching Academy.

Mauricio brings a variety of active teaching methods to his introductory evolutionary biology classroom and other courses in genetics. He led an interdisciplinary team in creating a National Science Foundation-funded program that couples rigor in genetics with language and cultural training to prepare students for scientific work in China. He served as the chair of the 2010 Quality Enhancement Plan committee that led to the creation of the First-Year Odyssey Seminar Program, and he has served on the University Curriculum Committee since 2006.

Mauricio is a recipient of UGA’s 2005 Richard B. Russell Award for Excellence in Undergraduate Teaching and the 2011 Provost’s Outstanding Faculty Service Award, among other honors. He has served as a Lilly Teaching Fellow, a Center for Teaching and Learning Fellow and a member of the UGA Teaching Academy.

Smalley, who is known for teaching horticulture classes under the Meigs white oak tree, has revamped courses to engage students with learning experiences in and out of the classroom. His Art and Gardens of the Grand Tour study-abroad program has heightened students’ horticultural and cultural appreciation since 2001. Via leadership positions in curriculum, global programs and strategic planning, Smalley has shepherded changes to his departmental and college educational endeavors.

Smalley received the 1994 D.W. Brooks Award for Teaching Excellence, is an eight-time recipient of the horticulture department’s Outstanding Teacher Award and is a member of the UGA Teaching Academy. He received the National Association of Colleges and Teachers of Agriculture’s Teaching Award of Merit in 1995 and the American Society for Horticultural Science’s Outstanding Educator Award in 2014.

Meigs Professors are nominated by their school or college and chosen by a committee consisting of 12 faculty members, two undergraduate students and one graduate student.

UGA engineering professor’s study among most popular publications of 2019