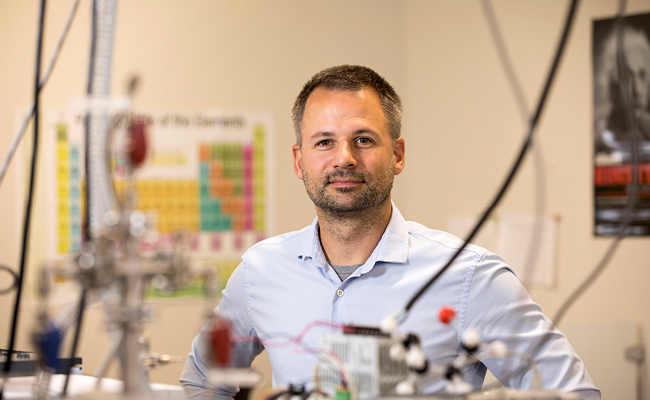 Brandon Rotavera’s path to becoming a professor wound through sport bikes and the twists and turns of racetracks, including the Daytona International Speedway, where he raced superbikes as an amateur before beginning his doctoral program.

“While I loved racing, when I thought about long-term career potential the pragmatist in me won out,” said Rotavera, an assistant professor in the University of Georgia’s College of Engineering. “So, I pursued an undergraduate degree in a field that could get me as close to the action as possible.”

Rotavera’s decision to leave motorcycle racing behind led him to study mechanical engineering with a focus on thermal sciences at Texas A&M University, where he earned his doctoral degree. He had become particularly interested in combustion science during his junior year as an undergraduate at the University of Central Florida, where he met the professor who would later serve as his Ph.D. advisor.

“So, it was somewhat of a circuitous path, but the short story is that I was drawn initially to engines, racing and motorcycles, and that led to energy science. As time went on, sustainability became a major thrust of my interest, as it is one of the most pressing issues facing society,” he said.

In broad terms, Rotavera’s research focuses on the fundamental science of sustainable transportation energy. His work is aimed at providing data for computer modeling that enables the design of next-generation combustion systems that operate at higher efficiency and generate less pollution. More specifically, he and his team use a combination of experiments, computational chemistry and computer simulations to examine connections between combustion behavior and the molecular structure of next-generation biofuels—renewable forms of energy derived from biomass.

Current projects in Rotavera’s research group are funded by the Department of Energy’s Office of Science and the National Science Foundation, among others.

Rotavera notes every mode of transportation produces pollution—even Teslas and other electric vehicles. He says it’s important to determine how much pollution and what types of pollution are created by alternative vehicles and alternative fuels.

“Our research focuses on these questions in the context of byproducts from biofuel combustion that may be emitted into the atmosphere and contribute to changes in climate and air quality,” he said. “Equally important, our research contributes to the longer-term, ever-increasing need for sustainable transportation energy.”

This research provides relevant context for lecture topics in the classroom, where Rotavera teaches senior-level undergraduate and doctoral-level courses.

“The fundamentals that underpin the work in my research group directly connect to the concepts and mathematics that I cover in class. Complementary to this, the classroom provides a dedicated, formal setting for graduate students to learn advanced topics that are relevant to their research.”

Believing it’s vital for graduate students to be able to effectively present and explain their research findings, Rotavera created the Riverbend Research Highlight Series in 2017. The series provides a 30-minute forum for graduate students to present current research highlights with their colleagues and faculty in UGA’s Riverbend Research Laboratories over the summer.

“The Riverbend Research Highlight Series was built on the idea that connective threads between groups and departments can often lead to new collaborations and reinforce a sense of community among the students and faculty,” said Rotavera. “The main purpose of the series, however, is to provide speaking platforms for graduate students to sharpen their presentation skills, which involves answering engaging questions from their peers.”

Rotavera believes three traits are critical for students to thrive in engineering and in research: curiosity, perseverance and self-reliance. While certain technical elements are vital to success in research, he says these three traits are innate to well-rounded students who are comfortable and productive working on open-ended scientific problems.

After earning his Ph.D. and before joining the UGA faculty in 2016, Rotavera held a postdoctoral appointment at the Combustion Research Facility of Sandia National Laboratories and is a research affiliate at Lawrence Berkeley National Laboratory. In addition to his role as an assistant professor in the College of Engineering, he is a member of the faculty in the department of chemistry in the Franklin College of Arts and Sciences.

“I chose to come to UGA for a variety of reasons, one of which was the sheer magnitude of research investment that the college and the university are committed to in terms of resources, infrastructure and growth projections,” he said. “It was also evident that there was abundant collaboration opportunities for me here within both the College of Engineering and in the department of chemistry.”

Rotavera also fell in love with Athens during his initial visit. He says the city is a great recruiting tool for graduate students looking for a top-tier research and educational experience while living in a vibrant community.

“Without question, one of the strengths of UGA is the students we attract, both at the undergraduate and graduate levels. There is also a spirit of collaboration here that makes it an exciting place to be as an early career faculty. I have ongoing projects with seven or eight faculty on campus, just in the first four years I’ve been here. Several of these were obvious and were worked on right from the start, while others were realized over coffee.”