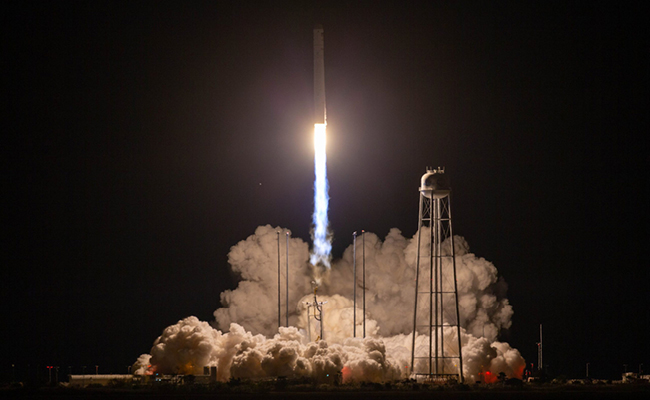 The new AIAA student branch will build upon the success of UGA’s Student Aerospace Initiative (SAI), which engages students in real-world multidisciplinary aerospace projects. In October, a small satellite designed and built by SAI rode into space onboard an Antares rocket launched from NASA’s Wallops Facility in Virginia (pictured above). The satellite was deployed a few weeks later from the International Space Station and is helping UGA researchers monitor the health of coastal ecosystems from space.

“The AIAA chapter opens up exciting doors for us in terms of both competition and professional development,” said Trevor Houghton, president of SAI. “This will allow us to network with more aerospace companies as well as compete in more national competitions. It’s an exciting time to be interested in aerospace both in Athens and the U.S.”

Ben Davis and Ramana Pidaparti, members of the College of Engineering’s faculty, will serve as the new AIAA student chapter’s advisors.

“Several students in the College of Engineering and in other disciplines across campus have expressed interest in pursuing aerospace careers,” said Pidaparti. “The UGA student branch opens up opportunities for them to connect with aerospace engineers and employers and to work on space-related projects. My goal is to encourage students to get involved with various aerospace-related activities that benefit them as well as the community.”

UGA students interested in aerospace, regardless of major, can participate in the AIAA student chapter.