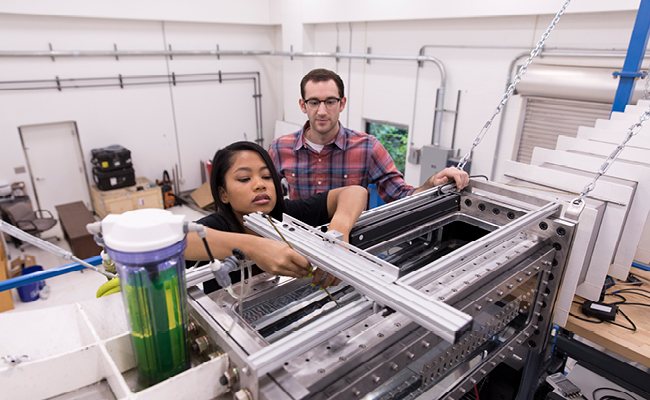 A newly installed 35-foot water tunnel at the University of Georgia’s College of Engineering will help researchers develop new methods of generating electricity and more efficient space and marine vehicles like rockets and drones.

Construction of the massive device began in 2016, and the water tunnel took about a year-and-a-half to complete. Built by Lewis Fortner, manager of UGA’s Instrument Shop, the stainless-steel tunnel can hold about 2,800 gallons of water.

“What the water tunnel allows us to do is to put submerged structures in high-speed flow,” said Ben Davis, an assistant professor in the College of Engineering. “These are flexible structures that will vibrate in response to the flow going past them.”

Davis was inspired to build the water tunnel after working at NASA’s Marshall Space Flight Center, where he worked with materials used to make rocket engines.

Davis, who joined UGA in 2014, helped design the water tunnel with Haynes Curtis, an undergraduate engineering student at the time.

Now a graduate student at UGA studying mechanical engineering, Curtis works with Davis to create models and test them in moving water, which can then be applied to real-life structures like drones, aircraft, rocket engines and other devices.

The tunnel, which Curtis calls a monster, stretches roughly 35 feet from one end of the lab to the other. The tunnel towers over the researchers as they crank up the 125-horsepower electric motor that propels the water.

At the top of the tunnel is a glass box through which researchers can observe the test object. This allows researchers to see flutters, vibrations or fish-like motions as the object interacts with the flow of water.

At 12 square inches, the test section in Davis’ water tunnel is twice the size of those found in other labs.

The tunnel in Davis’ lab is one of the fastest university-owned tunnels in the country, sending 11.3 meters of water from one end of the lab to the other. That’s about 275 gallons of water traveling 35 feet in one second.

The tunnel’s motor recirculates by pushing it through curved pipes in each corner called turning vanes. Then the water flows through a honeycomb structure that looks like a group of drinking straws that have been stacked and fused together.

“The different components are all designed to keep the flow and the test section as smooth as possible,” Curtis said.

After going through these tubes, the water reaches a bullhorn-shaped area called the contraction, which allows the water to flow smoothly into a smaller area before reaching the test section.

The tunnel is eco-friendly and has a mini pump that filters the water and removes debris, and a tank that can store about 800 gallons of water between experiments.

“It’s basically a closed system where once we’ve filled it, we really don’t have to use any tap water anymore,” Davis said.

Davis hopes to study the shape and movement of structures as they react to high-speed flow, and possibly help to design structures that generate upstream propulsion.

“Now that we have this,” Davis says, “we’re in a position to study things like that, which is kind of cool.”