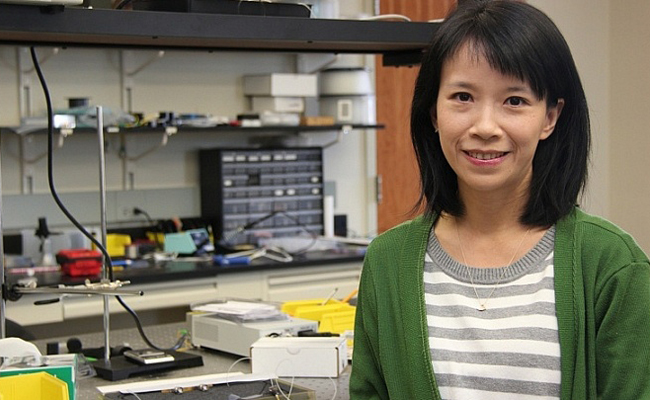 The proliferation of wireless devices may make daily life easier, but their signals are crowding an already limited number of available radio frequencies that enable wireless communication. A University of Georgia researcher is looking to make the most of the spectrum by using photonics, the science of creating, detecting and maneuvering light.

Mable Fok, an assistant professor of engineering who also leads the university’s Lightwave and Microwave Photonics Research Laboratory, received a National Science Foundation CAREER Award to study how photonics can be used to identify and harness unused holes in the radio frequency spectrum.

The spectrum is used to keep everything from wireless personal devices like cell phones and computers to medical system technologies and national security defense mechanisms running smoothly. But with the ever-increasing number of technologies relying on the frequencies, space on the spectrum is tight.

“Fundamentally, this spectrum is all we have,” Fok said. “We cannot create more space. But we can make good use of what we have.”

All of the applications relying on the spectrum aren’t in use around the clock, providing short-lived opportunities for others to use their space on the spectrum. But there currently is no way to rapidly identify which frequencies aren’t being used, which is where Fok’s research comes in.

Fok will use photonics technologies to rapidly scan the spectrum and find frequencies that are not in use. Once identified, those gaps can be used to meet radio frequency needs of various devices. Fok’s scheme not only allows the device to talk and listen at the same time using the same frequency, but it also enables the device to be “smart” enough to run away from interference and jamming.

Inspired by the glass knifefish, a small electric freshwater family of fish that people sometimes keep as pets in aquariums, Fok’s research will create a device to escape from the jamming frequency the same way the fish does. The fish use what’s known as a jamming avoidance response, or JAR, to prevent their electromagnetic signals from interfering with those of other knifefish around them.

“What if we can borrow the same algorithm and apply it to our radio frequency system?” Fok said. “If someone tries to jam our signal, we’ll be able to just move someplace else that no one is using.”

Fok will also use the NSF grant to help develop an educational app that helps people learn more about the field of photonics. Most people know about fiber optic Christmas trees and high-speed internet, she said, but that’s typically where the public’s understanding of the emerging technology ends. But photonics offers a smaller, more efficient and less expensive alternative to traditional electronics. For example, electric cables can accommodate, say, 10 people who want to transmit information while optical fiber can service significantly more in less space.

The grant is Fok’s third NSF award for her work, and it provides funding to early career faculty researchers who integrate research and education to further their institution’s research mission.

Lil’ Ice Cream Dude trades a scoop for a pencil