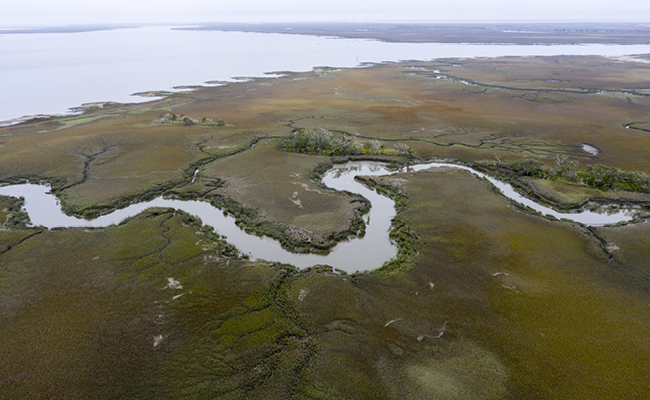 Coastal salt marshes play an oversized role in regulating the planet’s climate thanks to their ability absorb massive amounts of the greenhouse gas carbon dioxide from the atmosphere. While they occupy less than 2% of the ocean surface, scientists estimate coastal marshes and wetlands store nearly half of the total carbon buried in marine sediments.

Despite the importance of salt marshes, data on their ability to store carbon is incomplete because the work is labor-intensive, time-consuming and expensive. Now, researchers at the University of Georgia are taking a new approach that promises a more comprehensive assessment of carbon sequestration in the state’s salt marshes.

“Coastal salt marshes protect us from hurricanes and floods and provide critical habitats for fish, shellfish, and bird nurseries,” said S. Sonny Kim, an associate professor in UGA’s College of Engineering and the project’s lead investigator. “But salt marshes face multiple threats, including sea-level rise which could dramatically reduce the amount of carbon stored in these vital ecosystems. Understanding the amount of carbon stored in soils is critical to understanding salt marsh vulnerability.” 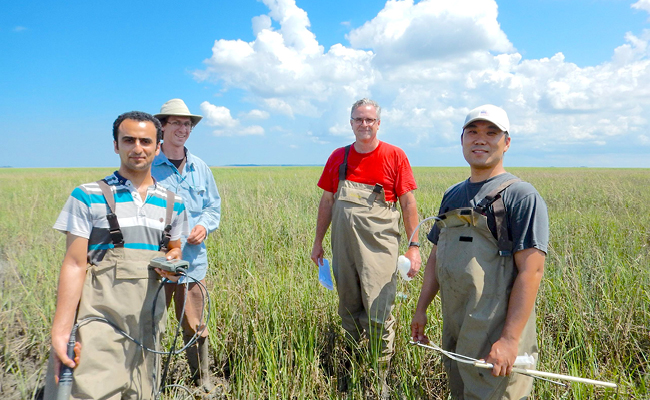 S. Sonny Kim (far right), an associate professor in the UGA College of Engineering, and his colleagues sample salt marsh soils at Tybee Island in 2018.

Kim and an interdisciplinary team are using a $1.17 million grant from the National Science Foundation and the U.S. Department of Agriculture’s National Institute of Food and Agriculture to investigate belowground carbon storage in salt marshes across Georgia. The three-year project will allow the researchers to develop a cost-effective, scalable and robust sensing framework to measure soil organic matter, primarily carbon, in salt marshes. The system will utilize smart field sensing, remote sensing technology, edge and cloud computing, and machine learning algorithms to acquire, store and analyze data from both near-surface and belowground.

“This project will represent a confluence of cutting-edge computing technologies, such as Internet of Things, Big Data, machine learning, cloud computing and edge computing, applied to an extremely pressing ecological problem,” said Ramaswamy and Kim.

The UGA team is deploying in-ground sensors outfitted with low-power wireless technology to gather data in three locations along the Georgia coast – Skidaway Island, Sapelo Island, and Brunswick. After collecting data on the ground for several weeks, the sensors will be re-deployed at nearby-by sites to address potential variability across large areas of marshes. The researchers will also use drones equipped with color-sensing cameras and satellite imagery to catalog the soil carbon in the salt marshes. Combined with core samples from the study locations, the data will allow the researchers to use machine learning algorithms to predict the surface and subsurface carbon stored in the marshes.

According to UGA Marine Extension and Georgia Sea Grant, the one hundred miles of Georgia’s coast is home to approximately one-half million acres of marshland – one-third of all the salt marshes on the U.S. Atlantic Coast.

“Salt marshes are some of the most valuable ecosystems remaining, so knowing how much carbon they actually store can help to underscore their importance to the global landscape,” said Sutter.

ROBOCROPS: Data science, technology and A.I. coalesce in the field of plant robotics