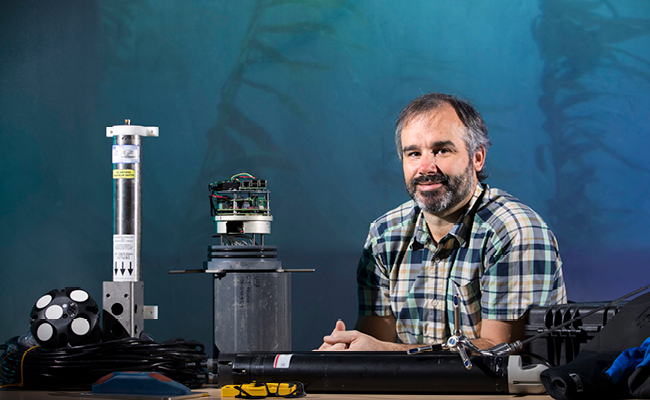 Kelp forests stretch from the Alaskan to the Baja Californian coast, where they thrive in the cool waters of the North Pacific and house entire food webs within their broad blades. In an effort that spans oceans, scientists from the University of Georgia and other institutions, fishing communities and citizen volunteers from the United States, Mexico and Canada are working together to track how warming oceans impact these ecosystems.

Brock Woodson, an associate professor in the UGA College of Engineering and a member of the multidisciplinary Institute for Resilient Infrastructure Systems (IRIS), works with communities in Mexico as part of this network, and gathers data about how environmental changes in kelp forests might affect the entire system.

The effort started 20 years ago, when the Partnership for Interdisciplinary Studies of Coastal Oceans (PISCO) first developed protocols for monitoring kelp forests. Specifically, they created specific methods for gathering data within intertidal zones, or the place where tide pools are left behind by receding tides, and subtidal zones, the deeper zones that require scuba diving equipment to monitor.

“By developing protocols early on, these data are beginning to enable us able to draw long-term conclusions, because all of it was gathered in a comparable way,” Woodson explained.

Initially, monitoring only took place along the United States West coast, but the network has quickly grown, and now encompasses multiple organizations, including ReefCheck, a foundation in Southern California with the mission of preserving reefs and other ocean habitats, and Comunidad y Biodiversidad A.C. (COBI), a Mexican civil society with the goal of saving marine ecosystems through the promotion of sustainable fisheries practices. With the addition of a research team from the University of Alaska, the network of data collection now extends all the way from Anchorage, Alaska, down to Baja, Mexico.

“Many fishing communities are involved on a volunteer basis with the goal of preserving marine resources for future generations. I’ve visited three co-ops ever year for the last nine years—which includes gathering data from 14 sensors on an annual basis,” Woodson said.

After 20 years of data collection, the group finally has amassed enough data to begin to uncover patterns in how global climate change may impact kelp forests.

“As waters warm in some areas, kelp biomass is moving northward, into colder waters,” Woodson explained. “But overall, the changes that we’ve seen are variable. Some species that  live within kelp forests have increased, while others have decreased. However, we have seen dramatic shifts in trophic structure. While urchins seem to be moving with kelp, many herbivorous and carnivorous fishes are not—and it’s unclear what the impacts might be on smaller aquatic animals.”

Like the trees within a forest, kelp provides structures to live and hide within for many oceanic species. As these structures move and certain species are left behind, aquatic systems are likely to greatly change.

But while change is certainly on the horizon, the network has hope that with management and a willingness in fishing communities to be adaptable—they may be able to protect this fragile ecosystem.

“In the fishing communities we work with, there is a clear concern for long-term sustainability. Fishing isn’t just a livelihood—it’s their community and future. Together, we’re on the lookout for ways to adapt,” Woodson said.