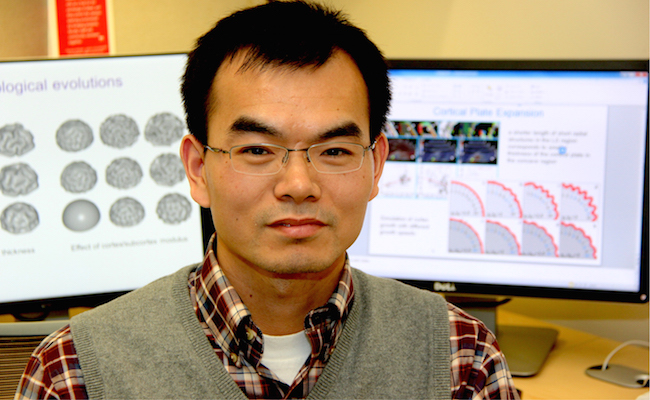 University of Georgia researcher explores the mechanics of brain development

To demonstrate the concept of cortical folding in the human brain, Xianqiao Wang picks up a piece of paper from his desk and slowly crumbles it into a ball.

“Crumbling a piece of paper into a ball and the folding of the cerebral cortex both involve mechanical processes,” explained Wang, an assistant professor in the University of Georgia College of Engineering. “Similar rules of mechanical instability regulate both the behavior of the paper as it is crumbled and the behavior of the cortex as the brain develops.”

While researchers have presented several theories over the years for why the brain folds, Wang wants to shed new light on how cortical folding occurs from a mechanical viewpoint. He is leading research aimed at unraveling the processes governing cortical folding and the relationship of these mechanisms to the brain’s functional organization.

The convoluted pattern of groves and ridges created by cortical folding is found in the brains of a limited number of species, including dolphins, elephants and pigs. In humans, the fetal brain is relatively uniform and smooth until about the 22nd week of gestation. At this point, the brain begins to develop at a faster pace and the surface, or cortex, beings to crease and fold. This process continues until the child is about 18 months old. The resulting ridges are known as gyri and the grooves are called sulci.

“I hope my research may eventually lead to earlier diagnosis and intervention for brain diseases,” said Wang. “Many brain disorders may be partly mechanical or structural in nature besides biological abnormalities.”

Wang notes researchers have identified differences in the number of cortical folds in patients with various brain disorders. He says in some cases, such as lissencephaly (in which the brain fails to form folds) and polymicrogyria (in which the brain forms more folds than usual), researchers have observed differences in the thickness of the cortex. Wang believes his work can lead to new insight on mechanical factors that may influence these disorders and others, including schizophrenia and autism.

To study the mechanisms governing the development of the brain, Wang is working with Tianming Liu, a professor in UGA’s department of computer science, to develop unique multi-scale computational models that mimic cortical folding. 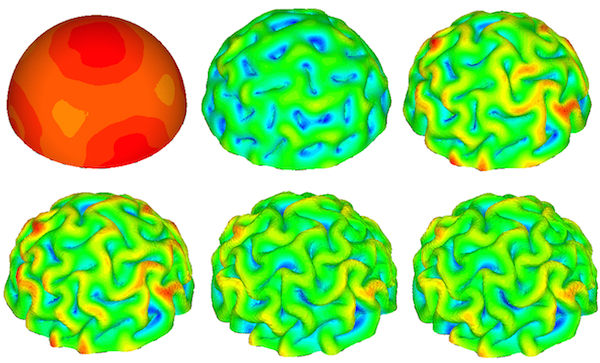 “Neuroimaging or brain imaging provides unlimited ‘static’ structural data but brain development is a complex, dynamic process,” said Wang. “Computational modeling is an approach that compensates for what ‘static’ observation and measurements lack. We can explore potential mechanisms in unlimited combinations, such as parts of the brain developing at different rates or neural axons pushing brain tissue in different directions.”

By fine-tuning the parameters of the models, such as the thickness and stiffness of the brain’s grey matter and white matter, Wang and Liu can efficiently process vast databases and multiple scenarios to validate or repudiate various hypotheses.

Although researchers have made significant progress in recent years in modeling the structure of the developing brain, Wang says there are questions that require further investigation. For example, why is the primary convolution pattern in the cortex highly correlated and consistent rather than random? What factors regulate this consistency? What is the fundamental mechanism of consistent gyrus formation?

In recent studies published in Scientific Reports and Physical Review E, Wang and his colleagues presented an integrated theoretical and computational tool designed to investigate the evolution of a developing brain’s shape based on a mechanical model.

The team’s computational simulations demonstrated that gyral convex patterns, or the ridges in the cortex, may occur in locations where the outer layer of the cortex grows faster than the inner layer.

“Using our models, we see that global differential growth can only produce a random gyrification pattern, but it cannot guarantee gyrus formation at certain locations,” said Wang. “The results also show that the thickness of the cortex, as well as the relative material properties of the cortex to the brain core, play critical roles in the patterns of the developing brain model. The results also link the gyrification patterns of the brain to its geometry and material properties.”

In the future, Wang and his colleagues plan to explore the formation of certain repeating patterns in cortical folds known as brain hinges. Wang believes the new research will contribute to an improved understanding of brain formation and the relationship between the brain’s structure and its function.